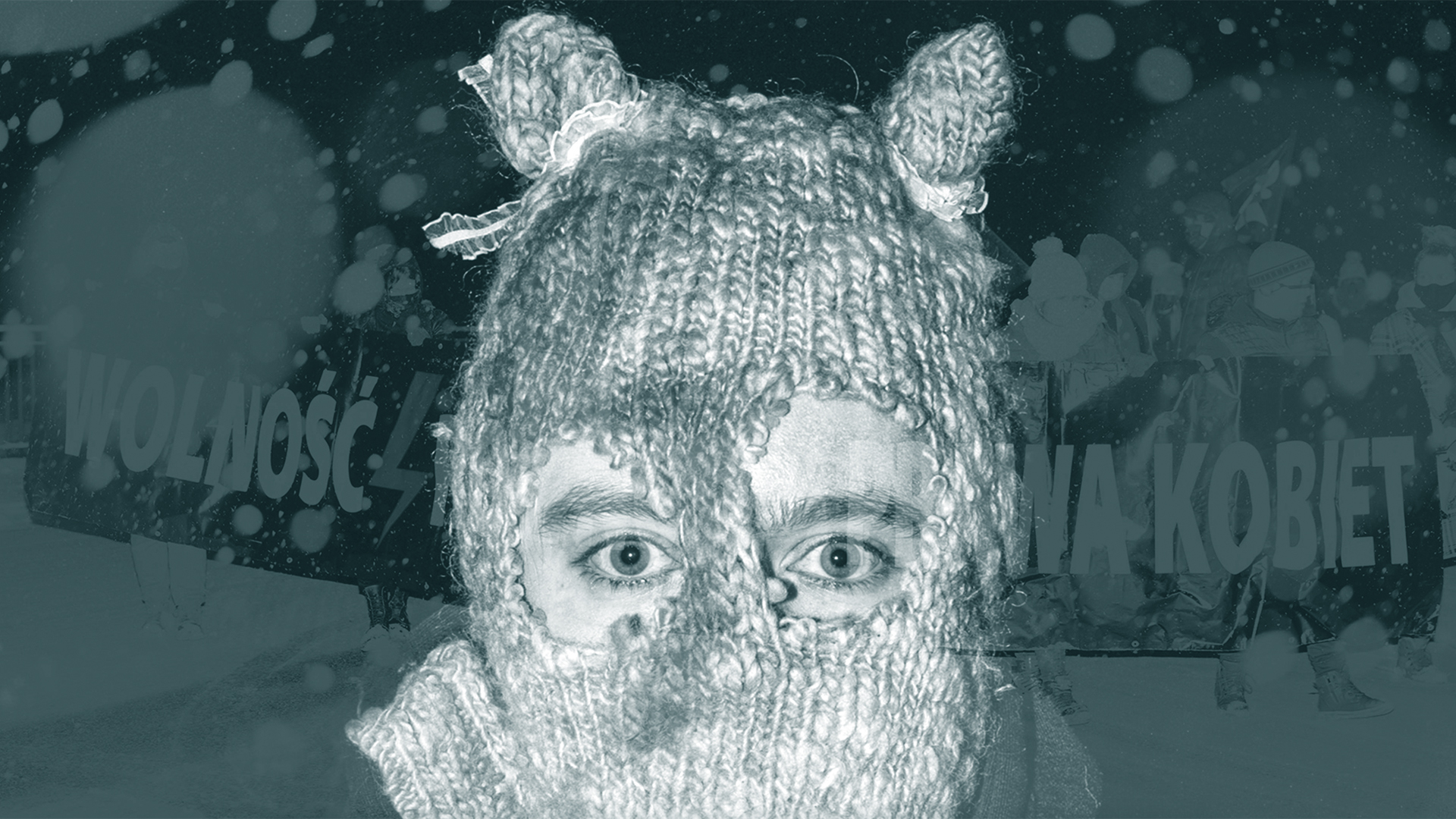 ANTIBODIES is a broadcast from the Polish streets and from within the female body, where the All-Poland Women’s Strike protests take place. It’s a manifest in progress, which shapes and transforms itself depending on what the collective body experiences, feels, and wants. There is a lot of anger and fear at the very bottom of it, though crumbled with hope, care and growing solidarity.

The anti-government demonstrations began on October 22nd, 2020, when the Constitutional Tribunal composed of judges appointed by the ruling Law and Justice party (PiS) tightened the law on abortion in Poland. Due to this novelization practically all cases of abortion are illegal now, which poses a serious threat to life and health of those with uteruses.
ANTIBODIES is a vivid, hectic monologue in move, where the crowd is a shapeshifter, the streets turn into tissues and cells, and the rhythms of the protest marches mold the flood of speech, giving voice and power to vulnerable bodies. While searching for allies, this intimate confession meets the radical language of the protest slogans, body leaks and soundscapes, and imaginary visual-linguistic outflow. Strongly believing that “all riots emit a world historical shine”.

video based on the photos of
The Archive of Public Protests (APP) / archiwumprotestow.pl

thanks to:
Łukasz Rusznica, Agata Kalinowska and Tomek Kireńczuk, to Ania Nowak and her sisbro Frédéric Gies for the sisbro word, to Gregor Różański for the title Antibodies, to Marzenna Maria Smoleńska for the ancient Greek tip, and finally to Homer for these 2 lines stolen from his furious Iliad.

Anka Herbut
Born in 1983, is a writer, dance and theatre dramaturg, researcher and curator living in Warsaw. Constantly crossing the boundaries between artistic practice, theoretical reflection, and socially engaged activities. The main area of her research encompasses poetry, affective language performatics, dramaturgies of resistance, feminism, and the relationships between art and politics. She is a recipient of the Grażyna Kulczyk Contemporary Choreography Research Scholarship (2019), which has provided a framework for an ongoing project Resistance Movements (Ruchy Oporu), in which she questions what bodies do and what kind of movement practices they employ to express defiance. Recently she was a resident of Biennale Warszawa, where she developed project BRAVE SPACES, in which she investigates the body agency and surveillance in the pandemic. She runs a radio broadcast Anyone who doesn’t jump about the choreographic strategies of resistance on the social radio Radio Kapitał.


Ula Wojtkowiak
Actress, drama teacher and theatrologist living in Warsaw. Studied at The Theatre Faculty of the Academy of Performing Arts in Prague (DAMU), Gardzienice Theatre Academy and Jagiellonian University in Cracow. Now teaches somatics in dance and therapy. She lived in Italy for several years and worked as a dancer and mime at the National Opera in Rome. Her main area of activity is searching for dialogue through movement and dance.


Karolina Zajączkowska
Born in 1990 in Wrocław. She maneuvers between visual and performance arts, using mainly photography, graphic design and film. Studied at the Institute of Creative Photography in Opava. She is one half of the artistic duo DWA ZETA (together with Zbiok Czajkowski), in 2017 they’ve established performative NOBODY CLUB - a fake social club for nobody. Her area of interest lies at the intersection of visual narrative, sexuality, politics and image theory.
www.instagram.com/thisisban

Marek Kazmierski
Born in Poland, raised in England. Writer, actor, author, translator, film-maker and visual artist. Winner of the Penguin Decibel Prize and Bike Philosopher of the Year Award in the UK, trustee of the Griffin Trust For Excellence in Poetry in Canada, and creator of Our Great Book Of Poland 2020 – the largest collection of translated poetry in the world.


Marzenna Smoleńska
Translator from Polish, Italian, and French. Working as a freelancer because of her love for freedom of choice. Collaborates with the Polish Institute in Rome and Biennale Teatro di Venezia. Translated loads of literary texts - Thomas Bernhard, Hanoch Levin, Tadeusz Kantor, and Dostoyevski among others. Works with Polish theatre directors Krystian Lupa and Krzysztof Warlikowski. Living and working in Rome.